The name Chewiwie (pronounced simply "Chewy") is of Native American heritage. Matt Chewiwie comes from a mix of Puerto Rican, Slovakian, Mexican and Native American (Tiwa) background. Despite this, Matt has never been to most of these places, and has grown up and lived almost exclusively in the North County area of San Diego his whole life.

Matt is a product of the Vista Unified School District, passing through Lake Elementary, Madison Middle, and Rancho Buena Vista High School. Matt spent most of his high school career heavily involved with the RBV Band program, where he played euphonium horn, was section leader during his senior year marching season, and even marched in the 2003 Rose Parade. During this time, he became very interested in the performing arts. Matt regularly would attend every Drama production, but never considered it as something he could actually ever take part in. He had already been branded a "band geek." 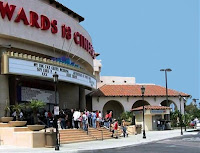 Matt continued his education on to Mira Costa College, eventually transferring to California State University, San Marcos. During this time Matt worked near full-time at the Edwards San Marcos Theaters to pay for his education, where he learned about event planning and how to operate a powered lift. Matt was one of the last fully-trained "film projectionists" to work with actual film there before the industry conversion to all digital projectors. Matt made many friends and family here. He even met his lovely wife Maeve there, offering her a ride home one rainy night when her car wouldn't start after a late movie. He would continue to work this job part-time for a total of eleven years (maybe partially to keep his free movie privileges for as long as possible.)

While at CSUSM, Matt studied digital arts and video production, majoring with a BA in Visual & Performing Arts, emphasis in Arts and Technology. Due to the interdisciplinary nature of his major, Matt found himself dabbling in performance art, choir, and even dance classes. The real turning point, however, was when a friend of his dared him to audition for the Fall play, a production of Charles Mee's "Big Love." Matt was initially horrified upon learning that he was actually cast as a character in the play, but he eventually tripped and fell hard into the world of acting. Matt caught the theatre bug and (willingly) auditioned for the next show he could - a student production of the musical "I Love You, You're Perfect, Now Change!" Matt was cast in a major role in the show, where he got to sing, dance, and experience a small piece of his newly discovered Broadway fantasy. It was great. 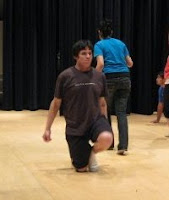 After this, Matt spent an extra year at CSUSM exploring a new world of performance art, building credits towards adding a Theatre Minor to his major. While he really enjoyed the performance aspect, he found himself gravitating more and more towards the technical side of production as his final year of college went on. Matt would spend much of his time saying "yes" to every technical project that came his way. The improv team needs a light board op? Matt would volunteer. Someone needs a poster or program designed for their show? Matt was on it. A dance major needs video projection mapping for their performance piece? Yep, Matt would take on that project.


During his final semester, Matt found a way to combine everything he had learned into a single multimedia project - a 30 minute capstone performance called "Out of My Head", where Matt used video projection mapping in tandem with choreographed stage movement and props. Matt did all the video editing, mapping, choreography, directing, lighting design, and performed in the show as well. It was the most elaborate and time consuming project Matt had ever undertaken at that point in his life.

Graduating and and having to leave CSUSM in 2010 was difficult for Matt, given all of his newfound passions and life experiences. He initially pursued work in the digital arts field, doing freelance graphic design and web design for several clients, but his mind always gravitated back towards performance arts. During this time, Matt would seek more and more small local theater jobs wherever he could, eventually landing a staff position as a stage technician for the Schulman Auditorium at the Carlsbad Dove Library. He would work at this venue for six years, where he'd run tech on many rental productions, and even host the Carlsbad Movie Nights for about two years. Matt was elated to back in a theater again.

It was the connections of his newfound family at Carlsbad Library that allowed him to make the big jump to Moonlight Stage Productions in 2014. As a long time fan of Moonlight, Matt leaped head first into his new performance venue. It had been several years since Matt had felt like he was somewhere he could realize his full potential as a stage technician and be doing the things he loves to do - make magic happen on stage.

Today, Matt is still happily employed by Moonlight Stage Productions, working primarily as a lighting electrician at the Main Stage every summer season, as well doing a variety of work for the Avo Playhouse during the off-season whenever he can. But the place you'll most often find him is Mission Vista High School, where Matt teaches Stage Tech 1 & 2, serves as technical director for many school productions, and is known as "Mr. Chewiwie." He has taken everything he's learned in his years since high school, and used it to build a program to help students discover new passions, just as he did through his own education. It is his hope that students will push themselves out of their comfort zones, try new things, and find the things that make them come alive, just as Matt has.

For Parents and Staff